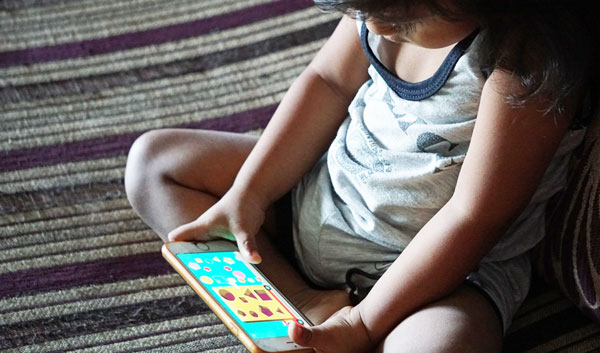 The rigmarole, of why a television set is called an idiot box, has been going on for ages. Some say it is because excessive watching changes our personalities, affects relationships, causes noise pollution, reduces physical interaction with people, while some also say that researchers have proved the deterioration in health and performance in children who are addicted to screen time. I was surprised that bad eyesight wasn’t one of the disadvantages because that is what we have been hearing since we were little. Because of these reasons, instead of making use of the parental settings, we find it easier to completely avoid access to the kids.

And, now we also have our smart phones which have replaced gaming devices, computers, radios or music players, personal organizers, cameras, navigation devices, telephones, clocks, flashlights, books and also the televisions themselves. There are a lot more that you can do with your smartphones and therefore it is called the true-all-in-one gadget. So, we have passwords to avoid the kids from accessing it because many of us feel that device time is a total no-no.

But, personally, I feel that screen time can be both; a boon and a curse, in many ways. Of course, all the curses are mentioned above, then, what are the boons? Are there any? Can you think of some? I’m probably writing what some of you may also believe in but for those who feel that screen time is a strict no-no, maybe you could give it a second thought.

As all of us are aware, to accommodate the rising population and increase of nuclear families, a number of structures have resulted in the cutting down of trees, demolishing of illegal roadside stores and destruction of huge grounds that were once used by us, and the previous generations, to play. There are limited outdoor activities available to kids compared to hours during the day, especially on holidays. An hour a day is probably a good amount of time to keep them busy with a kid-friendly movie.

Up to date with technology

Young minds absorb a lot and there are many features that they learn about before us. When I initially began using the smartphone, I did not make use of half the features that were in it. We slowly learnt how easy our lives could get when you downloaded applications and for example, opened a fixed deposit without having to do the tedious job of visiting the bank itself. Teenagers of today, know the different applications used or can be taught how to save money with just a click. Many of them are aware of how to contact whom in case of an emergency. Basically, a smartphone helps them to easily connect with the outside world and be aware of the latest technologies.

While there are many hopeless cartoons today, there are plenty of cartoons that you can allow the little ones to watch and be occupied with. Channel Baby TV cartoons had some good stuff that sometimes put my baby to sleep. Channel Disney Junior has some cartoons that help the kids to understand how to solve a problem. Channel Nick Junior has cartoons like Dora the Explorer and Diego who are independent kids who find their way around and help others. I have found my kids, who are totally engrossed in the cartoon actually responding to their questions on what to use or which path to take. I totally loved the engagement it had with the kids.

Honestly speaking, my daughter learnt her alphabets, numbers and colours from videos on YouTube. I would read to her every night but I was happily surprised when she sang the alphabet song and counted her Jenga bricks with her cute little baby accent. She would also correct me when I pronounced the alphabet Z as ‘Zed’ instead of ‘Zee’.

There are plenty of games online but the ones that my husband and I, as parents, allow the kids to play are the math games, word games and strategic games. Pictionary is a game that my daughter had learnt because I played it often. So, I guess if we introduce them to such games and show them how excited we, ourselves, get while playing them, they should follow in your footsteps, at least during their younger years.

Having said all this, the above can only be a boon if a careful watch is kept on the duration of their screen time. Also, instead of completely avoiding the screen time, I think it is necessary to discipline and teach our kids how to have a restricted period for screen time.

What do you think of this article? What are your views on screen time?