WHY I STOPPED WATCHING THE NEWS MANY YEARS AGO

THE BEST BAKERS NEAR YOU – TRIED AND TESTED!

BLOGABERRY DAZZLE! REGISTER NOW TO TAKE YOUR OWN BLOG TO THE NEXT LEVEL

WHY I STOPPED WATCHING THE NEWS MANY YEARS AGO 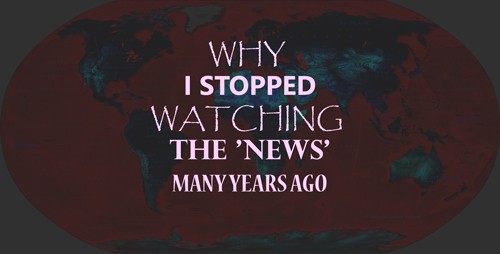 I quite love the way Twinkle Khanna connects humour and politics in flawless ways. I would actually go and Google search the particular news or ask my well-informed husband about what she has written, AFTER I’ve read her article. My curiosity arises only when I smile at her blatant words.

Recently, there was this article about Kapoors and pangas and I got to know who Gitanjali Rao was only after Mrs Funny Bones wrote how Indian mothers are going to start comparing their kids to the Kid of The Year! So, yes, this is how I get around knowing what’s happening in the world around me. And, then there’s Facebook and WhatsApp.

I’m not saying that all of you should stop watching the news too, because there are some of us who get to know about important happenings only because you guys watch the news or read the newspapers daily. I just wanted to write about why I don’t watch the news because many people have been asking me about it.

Personally, I believe that the benefit of reading newspapers or watching the news is only that they help some of us realize how blessed we are in our little cocoon. And, yes it is good to know what’s happening at least in our own country. And, perhaps to find jobs! But, otherwise, nah!

So which one are you? Are you the one who faithfully watches the news to stay updated? Or, like me, do you rely merely on Facebook, WhatsApp and husbands for updates? I would love to know your thoughts!

This blog post is part of the blog challenge ‘Blogaberry Dazzle’ hosted by myself and Noor Anand Chawla, and happily SPONSORED BY RRE Studios and SHOWCASE Events.