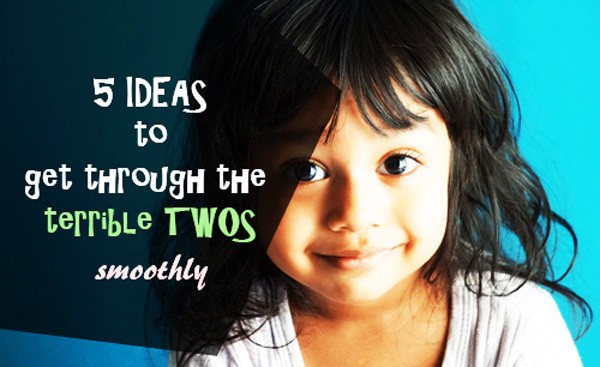 I’m not sure if they call it the terrible twos because the parents notice changes in the behaviours of their two year olds or because the kids’ tantrums start at this age and never end. While I just realized that I’ve passed this period twice and did not feel, even once, that it was a ‘terrible’ time, I’ll give you a few ideas on how you could handle this phase smoothly. It’s not a cake walk but it’s not like walking on a bed of thorns either.

Read the importance of Teaching Kids about Life Skills!

This chapter could last anywhere from 18 to 36 months. During this time, our kids totally adore us, whether they show it or not, and being there with them is the only thing they need. Their eyes have both, mischief and cuteness, overloaded in them and as per my experience; you just need to find time to get involved with both qualities smartly.

Let me know if you have any other ideas besides the ones I’ve listed below.

Besides implementing the above, there are a few other things I do so my kids have a better understanding of how to behave in general. I keep reminding my son that he cannot break things in the shop or that would be the last day he was accompanying us while shopping. I keep encouraging him to walk so that his legs get stronger. I avoid giving them junk so that they eat their fruits and food on time, without any fuss. I let them sleep as much as possible without waking them up except for school because I truly believe that resting is very important for our well-being and theirs.

Also, a boo-boo is never ignored at home, so kissing the boo-boo is a must in order to let the wounded lambs feel better. In return, my boo-boos are also well taken care of. While being naughty is cute, being aggressive can be equally intimidating. You have to make sure that your toddler’s bad behaviour is avoided in public, by correcting them while they are at home.

Do try these ideas out and let me know how you managed/are managing the so-called ‘terrible twos’ time.