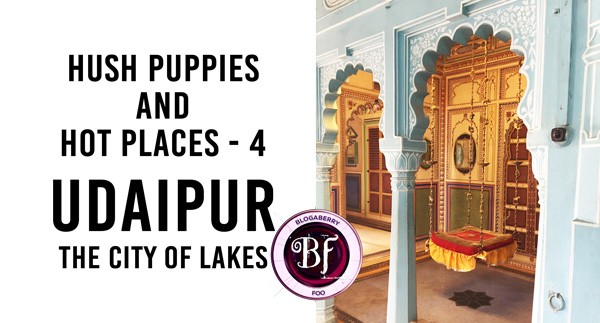 We then headed to Udaipur, The City of Lakes.

On the first day, I felt like Tarzan and went shopping along with my 9-month-old son in arms. Thankfully, he did not get restless under the scorching heat but, instead, enjoyed the colourful items he got to see all around us. My Hush Puppies, on the other hand, felt the direct heat from the Earth.

The shopping center, Hathi Pole, was filled with attractive and colourful handicrafts created by various artists. Slippers, mobile pouches, shawls, duppattas and bags were among the things that caught my eye and bought. My friend and I looked like two hippies with large bags of loot behind us (almost like Santa Claus’). Yes, we had shopped quite a bit.

Another friend and I visited the Udaipur Palace. We were short of time and the palace would close in a couple of hours, so, we decided to get done with the palace and then head on to our next touristic visit. We had to leave our cab at the security stop, from where it took forever to reach the gigantic spiked doors of the palace.

We enjoyed the view of Lake Pichola on the way up. We hired a guide and because he took us through the museum by fluently telling us who did what and what the kings used and which was the king’s favourite wife, and so on, the question I always put forth to my mother, since class ten, was answered.

WHAT UDAIPUR PALACE TAUGHT ME!

Why we were taught history in school! It perhaps was to become a palace guide because I was totally fascinated by his flawless relation of the historical events. He was answering questions better than my history teacher did back in the day. It was like as if he had lived in that era along with the kings and queens.

How life was as princesses! The palace had battle paintings, silver items and old photographs on display. The ornament windows, which were an inch deep, from where the women were permitted to look out, led me to think about the lives the princesses led. Though they were spoilt with riches, their lives were within the palace walls. They were not allowed to be seen by the outside world, so, they had to struggle and strain their eyes, through those windows, if they wanted to watch the events taking place outside. Sheesh!

How people survived without electricity! Everyone had to get to their respective rooms before the sun set. The way to their rooms consisted of narrow (almost claustrophobic) corridors which were lit up only with the sunlight. The corridors were lined with thin and opaque marble windows which allowed the sun’s light to shine through. I guess this meant no reading a book before going to sleep.

I questioned the guide as to how a mother found her lost child in this palace, with numerous corridors leading to various rooms, without disturbing anyone. He said that they had plenty of nannies to do that work.

Why we should be brave! The corridors got narrower and the doors were a little more than five feet high. This meant that I could walk through easily but my husband would not (not that he was present, but thoughts are always in your head). I also wondered how a tall and fat person would walk through these spaces.

But, why I mentioned ‘brave’ was because the guide could have been taking us to a dungeon to chop off our heads for all we knew. We were tiny women blindly following him through the deep winding corridors of the palace. For a long time, we were not even sure if we were on the top floors or in the basement.

A king was a king! – From a bird’s view, the palace looks like a ship which was amazingly built. This we knew because of the model of the palace placed in one of the halls. There was an area allotted for the king and his hookah. There was a ‘honeymoon’ room which was very small and consisted of only a bed and a bedside table. It confirmed that nothing else happened there except what was supposed to.

The rooms were pretty far from each other, and required a lot of walking. Despite that, most of the kings were fat and stout, which only proved that they had lots and lots of Rajasthani food to eat. Physical activity wasn’t a part of our culture back then. I, myself, had managed to put on quite a lot of weight in the 9 days I spent in Rajasthan.

The king built a palace for each season. During winters, he would reside in the city palace, situated on the banks of the Pichola lake. The one we were exploring was the city palace. In the middle of the Pichola lake, the summer palace or lake palace was built (now known as the Taj Lake Palace, the most romantic hotel in the world) to cool them off. And, so that they could offer prayers to the ‘God of the Sun’ at the crack of dawn. The monsoon palace, built with a spectacular view, overlooks the countryside (ancestral home of the king), lakes around the city and surrounding palaces as it stands on top of a hill. Each of these palaces had a different queen in it.

After being captivated by royalty, we headed to Saheliyon ki Badi (a huge and lavish garden made by a king for the royal ladies). It was lovely with fountains, elephant statues, lotus pool and architectural walkways.

I imagined little royal girls playing and giggling around the garden. How their lives were when they grew up, I wonder. It was quite good but sad, depending on how you looked at it. I’m thankful that I wasn’t born into that era, or was I once a princess myself? Anyway, keeping our personal thoughts aside, let’s all enjoy the view of the palaces while keeping in mind that our little ones are our princesses. We have to raise them to be strong, brave, independent and good human beings.

Have you read this series ‘Hush Puppies and Hot Places’ from the beginning? If not, start here.