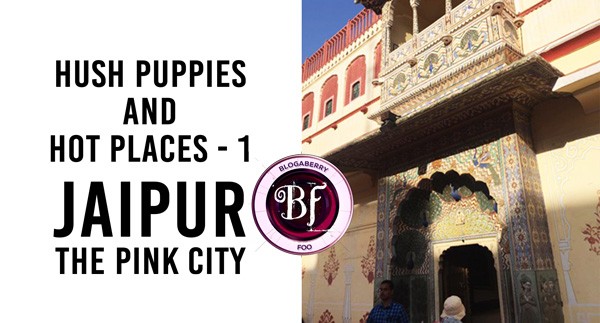 After I dyed my hair pink, we decided to visit the Pink City of India during its peak summers. It was HOT. My poor Hush Puppies faced the sizzling temperatures that I did only back in Kuwait; when we could feel the heat from the ground burn our faces like we would if we stuck our faces into an oven. So, you can imagine what my sandals have been through because of their direct contact with the Earth. I wondered why I spent my daughter’s school holidays in such an extremely hot place as opposed to the cool city I actually reside in.

Amber, as it was initially known, was re-baptized to Jaipur, The Pink City, during the rule of Maharaj Sawai Jai Singh. Before we stepped into the city, my daughter and I were curious to see a city filled with pink buildings. But, we were quite disappointed with the shade of pink it really was.

We stayed at a friend’s place and the day began with besan ki barfi, kachoris and a sandwich, stuffed with onions, tomatoes and cucumbers, for breakfast. Generally, according to my friend, normal people enjoyed this with tea, but I don’t drink tea or coffee, so, I relished it with a glass of fresh watermelon juice.

We, women, decided to leave the kids and their fathers at home and go shopping at the famous Bapu Bazaar. The streets were lined with shops selling the local handicraft items and oxidized jewelry. I went bonkers even though I am not the traditional attire type or a shopaholic. I bought items worth a few thousands in less than fifteen minutes and we had covered more than fifteen shops by then. Yes, I shop fast. I have no patience, whatsoever, to slowly try and buy things after thinking about them for hours (like my husband does and therefore I dread shopping with him).

My friend, already bored with the shopping, dragged herself behind an excited me, who asked all the shopkeepers for only a choli (an Indian short sleeved bodice) along with actions on how you wear it. They looked scandalized because normally women bought the whole outfit; top and skirt, and I just wanted the sexy top. My friend and I enjoyed looking at their reactions but she still missed her evening tea which she required to stay awake at that time. We bargained a lot and I bought handmade Jaipur slippers, handbags, mobile pouches, umbrellas, pom-pom earrings and a bunch of oxidized jewelry (which my skin does not approve of by the way).

We called the driver and realized that we had talked so much that we did not notice when and where we had turned because, in spite of our U turn, we were lost. We found an auto rickshaw to get to where the driver waited for us. I enjoyed the short rickshaw ride.

We (along with our hubbies) had lunch at a ‘dhaba‘ (a roadside food-stall), which looked more like the king’s outhouse; divergent to the ones I’ve been scared to enter all my life. Sharma Dhaba was not your usual dhaba you would find on the highways. It was a posh restaurant and the food was really good. We licked our fingers dry.

Luckily, we spent a whole day at the BMW Experience Tour where I got to drive a sedan as well as an SUV X5. I was the only female driver during that batch and realized that I was no longer Michael Schumacher who could drive at 140kmph once upon a time. Later, we celebrated the rejuvenating experience by gobbling up some spicy but delicious kheema baati (two huge round flour balls deep fried and stuffed with spicy minced mutton) somewhere around the town. We also had some yummy ice-cream falooda there.

We met a few more friends for dinner past midnight and headed to a Muslim joint, that prepared and sold the best nihari (a stew consisting of slow-cooked meat mainly beef or lamb along with bone marrow) in town. Our mouths were relishing the niharis and the parathas that we had along with them. The food was too good but sadly, I have no memory of the name of the place.

We went to see Hawa Mahal in the heart of the city. It was in the midst of a heavily populated area. I wasn’t too interested in getting into the place (a high wall built so that the women of the royal household could observe street festivals through little windows that shielded them from the outside world), so I admired it from the outside and shopped around it. There, I finally found the sexy choli.

Instead of leaving the kids to snooze in the car, we decided to carry them on our strong shoulders, avoiding thoughts of a cracking spinal cord. I’m glad we took that decision because we got some cute and memorable snaps of us all in the dazzling Jaipur City Palace. The architecture from those days continue to overwhelm me when I imagine those slaves and peasants working on each of the walls, doors or even a tower outside the palace. Their work was so intricate that eventually turned out to be breathtakingly exquisite.

After more than a couple of hours in the Palace, we went to view the Amir Palace across the river. By then, my husband and I were certain that we had to come here once again as none of us had the strength to walk up to that stunning fort carrying our offsprings on our backs. My Hush Puppies on the other hand were still going strong and all set to visit the next hot leg of our journey.