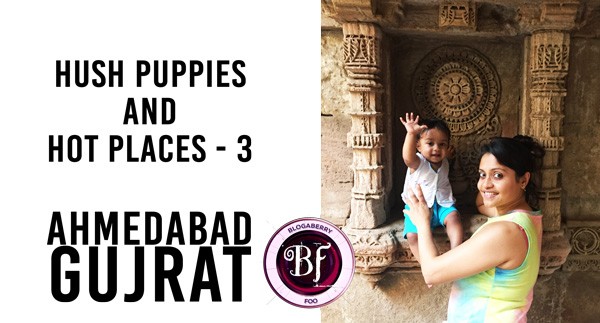 Before we went to Udaipur, we stopped to spend a day in Ahmedabad, Gujarat for a reunion with friends after four years. My hosting friend and I went to KFC; the meal I needed after all the Rajasthani vegetarian food I ate in the past few days. Ah! It was delicious.

We drove through Old Ahmedabad which was separated by the wall built by Sultan Ahmed Shah. I imagined how it would have looked years ago with no buildings around it. A huge wall that symbolized the heart of the city.

After we viewed the Dilli Darwaza (one of the 12 commonly known darwazas or gates around Ahmedabad), we visited the 400 year old Adalaj Vav or step-well also known as Rudabai Vav. Till then, I did not know what a step-well was but when I entered the gates, I was awestruck! There was water in the lowest levels, so, we were allowed only till a little above it.

But, the place was huge. And, it was a magnificent well, as opposed to those we normally see around us; small round walled holes with water inside them. This one was like a palace under the ground. Its walls, ceilings and pillars had beautiful architecture on them. It was an overwhelming sight of a five storey structure underground.

It amused me to know that this was built by the invader of the city, Mahmud Begada, for Rana Veer Singh’s wife, Queen Rudabai. On researching it later on, I got to know that Rana began building it before he was killed in the battle with Begada’s army. As he wanted to marry the stunning dowager Queen, he completed building the step-well for her (her condition to marry him) before she ditched him and killed herself. Begada was so impressed with the architectural work that he killed the masons who agreed they could make a replica of it. Similar to the Taj Mahal story, isn’t it?

Many battles and love stories later, here we were trying to draw it or take photographs of it from different angles. Naturally, the pictures won’t do justice. You have to view the grandeur for yourself. I wanted to sit there and inhale the majestic feel for a little while longer when I realized I couldn’t spot my 5-year-old daughter anywhere.

Whacked back into the present, I went looking and found her looking at me from above the step-well, along with her father. Phew! We walked around it some more before we headed to have some snacks.

My Hush Puppies had to walk into some water on the road but they were alright. After enjoying some delicious chaats (Indian savoury snacks), paanki chatni (rice pancakes steamed in banana leaves) and sugarcane juice at Swati Snacks, we got up to go home.

Later, a friend’s friend took us for a crazy drive, around the city, in her open jeep. It was perhaps the first time I had ever sat in a vehicle without a top so I absentmindedly placed myself in the middle. Why? Because, I still think I’m thin and feather weight and may fly off easily!

Like all good things, the day and drive came to an end, so, we called it a night after some chit-chatting, drinking and eating at home. We celebrated a birthday and had a famous sponge cake from Pune’s Kayani Bakery.

Next morning, we were again up by 10 00 hours to finally drive to the last leg of our journey – Udaipur.

Have you been in a step-well? Did you love it like I did?