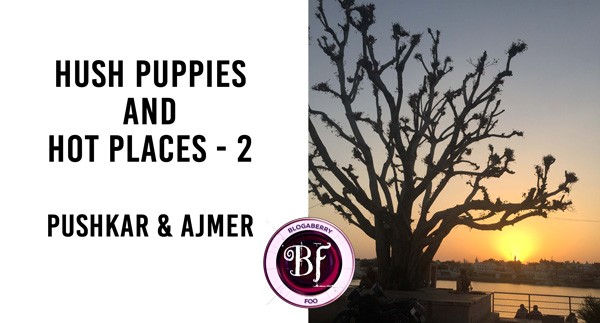 We drove from Jaipur to Ajmer. We stayed at a friend’s place for a day and decided to visit the location of the famous Indian series ‘Diya aur Bati Hum’; which I used to watch when it began and then got weary of the repeated torture the daughter-in-law was going through. Anyway, we drove through the Nag Pahar (Snake Mountain) between Pushkar & Ajmer and spotted a few grey langurs (baboons) on the way.

We visited the Sunset Hotel in Pushkar and watched the sun set behind the lake while the mosquitoes, as usual, found my legs and my feet through my Hush Puppies.

It is believed that Lord Brahma was looking for a place to conduct a religious ceremony and dropped a lotus which fell on the land now called Pushkar. The beautiful Pushkar Lake is surrounded by 52 bathing ghats (a series of steps leading to the lake) and over 500 Hindu temples. The view of the sunset overlooking the lake was divine through the trees.

The water was not very clean around the edges and the steps were splashed with blobs of cow dung and the cows moved around there, too. Despite that, a woman had the audacity to ask me to take my Hush Puppies off while standing on the steps. Did she really think I’d stand there without them? I went back to the shack and immersed myself in the beauty of Pushkar. Despite it being the only one in the world, we could not visit the well-known Brahma temple as we were pressed for time.

The party at night, back at Ajmer, allowed me to meet a bunch of interesting women with different backgrounds. One was a dancer, one a full time outbound working woman, one a trophy wife and one a doctor. We exchanged information and hobbies and as soon as they got to know I was a belly dancer, we had a session for an hour where I taught them a few moves. I had fun being on the teaching side for once. If we had a little more time left, I was sure that that hall would have turned into a mini disco as all of us loved to dance.

Next day, my Hush Puppies would see Bhilwara. The two-hour drive had me wishing for a time-machine where I could vanish from one place and appear at the destination. I love holidaying but the road travels kill me; especially when with kids.

Nevertheless, we reached the cleanest city in Rajasthan and rested at a friend’s home. The get-together was planned there. After a good nap, we had a lovely chit-chat and singing session. Of course, I sang too while my Hush Puppies relaxed in the air conditioned room because the next day we were to drive to Ahmedabad, Gujrat.