After my husband attended a leadership training session two years ago, he insisted I attend the next one as it was a wonderful learning experience. I ignored him for the next two years as I had taken up several other commitments which did not include a lecture. This year, he again insisted I attend the session which was to take place in Namchi. Assuming that Namchi was another hot place in the South of India, I almost rejected the offer as I had more than enough of the heat and humidity in Goa and Bombay just recently. Once I learnt that I was being forced, by my husband, to go to Sikkim, a cold place in the North of India where neither of us had been to before, I smiled and agreed like an angel, while the little devils in me jumped and danced the ‘bhangra’ with joy! 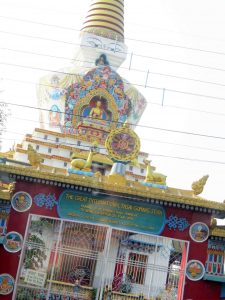 The travel time from my house to the hotel in Namchi was approximately 12 hours and I still had energy to party all night. The travel time included landing at Bagdogra, Siliguri, catching up with the other attendees, lunch, slow driving uphill to the hotel and stopping for scenic selfies on scary heights. Half way there and I was already mesmerized with the beauty of the place. By the way, Namchi means sky-high in Sikkimese. The clouds floated around us. The view was beautiful. The hotel was cosy. 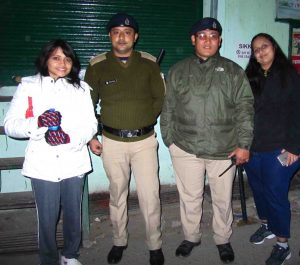 Just a picture with the police at the Namchi market

On the first day, after the training session, we strolled through the Namchi market at night. It wasn’t as cold as it was supposed to be but quite pleasant with our jackets on. I was surprised to see brands like Aurelia and Raymond there. Today was just to observe my surroundings. It was a very peaceful market as compared to the ones in the big cities.

As planned by the trainer, we went to the Char Dham at 7 in the morning. Yes, I woke up to go sightseeing and it was worth every ounce of sleep lost. There are times when I prepare myself to open my eyes merely because I’m excited about what’s in store for the day. The Char Dham (the four abodes) here is a replicate of the four most revered Dhams, of the Hindus, otherwise present in different parts of India. They were all built in the same complex to benefit the devotees as well as tourists. Otherwise, we would have to visit the four Dhams separately in Badrinath, Dwarka, Puri and Rameswaram. 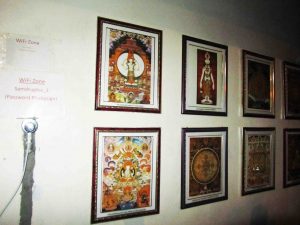 After the training, all of us headed to the Buddhist Monastry that night. Just as we stepped out of our cars, the lights went off and we had to wait until it came back on in order to walk around the place. In the meantime, to keep the chills at bay, we had a bowl full of hot waiwai soup each; Maggie noodles of the North. Alright, at least I had a bowl full. When the lights finally came on, we finished our soup and hurriedly started to explore the Samdruptse monastery with a massive Guru Padmasambhava statue sitting on it. We tried to click a few selfies with the statue because that was the best shot we could get of it at night. None of us had a good camera but we did have mobiles and the monastery had a ‘wifi zone’ with the password mentioned for all to use. Yes! You heard that right. We did not try if it worked but was really tickled about a monastery giving free network when no one else really does. 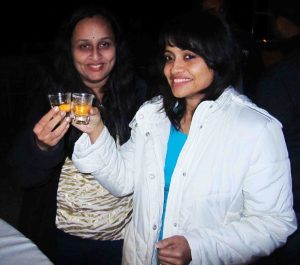 Cheers to Motherhood and Parties

We also had a spontaneous in-house clubbing session before I gobbled down some (approximately 30) lip-smacking chicken momos that night. Mind you, just a couple of us were non-vegetarians so we had the whole cauldron of chicken momos all for ourselves. I could not survive too long with the vegetables alone so this was the only non-vegetarian food made, especially for us. I know my friends are not surprised at all but for those who do not know me, I am quite the foodie. Just for the record, the hotels there do serve chicken but the trainers organizing it selected a vegetarian menu keeping the vast majority in mind. We had some tequila shots and a lot of unmentionable stuff. 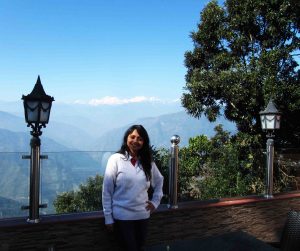 Snow in a distance

The morning, we checked out, was fresh and we clicked a few pictures before we left. Almost touching the North of India, the only snow I got to see was on the tip of the mountain far away in a distance. The drive down the hill was breathtakingly beautiful with the clouds floating around us as we headed to the airport to catch the plane home. I bid farewell to Bagdogra – a name I couldn’t even remember how to pronounce two weeks ago. 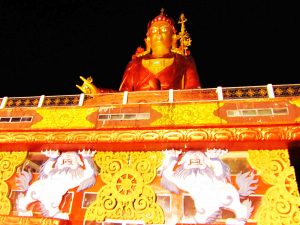 Guru Padmasambhava statue on the monastry

This was the first time I left my 3 year old daughter for four whole days. She survived and so did I. I needed this and from then on she began understanding that sometimes I needed to go out without her just like she would, without me, in the near future. It is heart breaking but she has to learn to live without me at times. She has to learn to be independent and not rely on me for every little thing she needs. The selfish mother in me partially wants her to need and want me at all times, but I have to be strong and let her live her life. Let her have her moments of pain and get over it. Let her learn to live. I know she’s only 3 but I’m already 33; and I couldn’t wait until she was 13 to go on a trip all by myself. What if I don’t reach that year in my life? What if I’m too old to walk by then? Live today like tomorrow is never going to come! Cheers to life! Cheers to living your life!